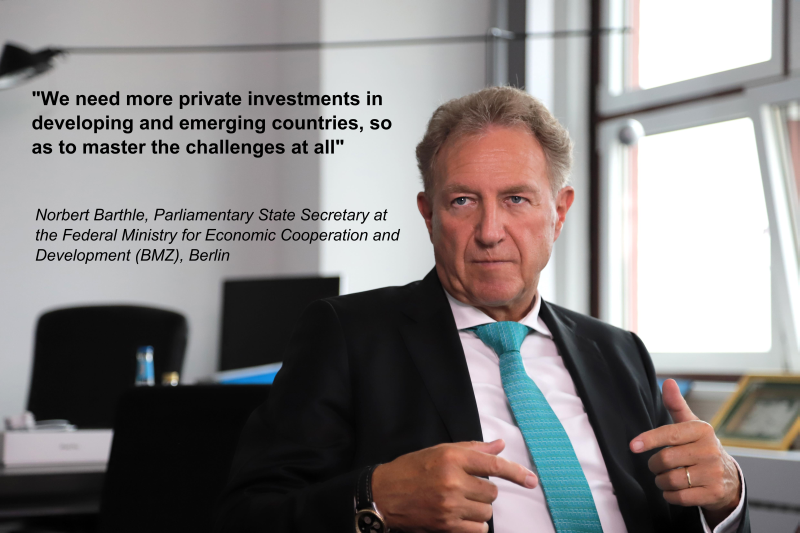 Since the beginning of this current legislative period, we have spoken with two Parliamentary State Secretaries of the Federal Ministry for Economic Cooperation and Development (BMZ): Mr. Thomas Silberhorn on 13 January 2016 and Mrs. Dr. Maria Flachsbarth on 15 August 2018. However, the Federal Government's policy on Africa is developing so rapidly that we held a third interview on 30 July 2019 with the Parliamentary State Secretary Norbert Barthle on the news of German-African development cooperation.

Mr. Barthle, on 19 March 2019, Development Minister Dr. Gerd Müller said at the "Africa meets Business" event in Berlin that of the billion Euro earmarked for the development investment fund, the Finance Minister promised only 100 million so far and asked for support from the Bundestag members present. What about the financing of the fund?

PStS Barthle: First of all, this call for help from Development Minister Dr. Müller has been successful. In the budget negotiations for the year 2019, we have reached an additional 800 million Euro approved in the parliamentary procedure. Hence, the parliamentarians raised the budget we presented to the Finance Minister by 800 million Euro. In this respect, for the first time in the history of this House, we have a budget of more than ten billion. More precisely 10.2 billion Euro.

But the Finance Minister seems to be frightened by the gloomy economic forecasts of the next few years and is pushing for the budget. How does it look for the BMZ until the end of this legislative period?

PStS Barthle: For the coming year, we have a financial plan of 10.3 billion Euro, and we may now get a slight increase again through the parliamentary procedure. However, the decision is not made by us, but by the parliamentarians. As for the billion promised by the Chancellor for AfricaConnect, AfricaGrow and the Advisory Network, the amount is earmarked for three years. In the meantime, we can say that on 4 June 2019, the Minister announced the official launch of AfricaConnect at an event here in Berlin. We have already received 80 concrete inquiries submitted to DEG (Deutsche Investitions- und Entwicklungsgesellschaft) after appropriate support for this fund. And we want to start afresh the second part, AfricaGrow, this year until November.

What is AfricaConnect and AfricaGrow?

You name two initiatives that are little known to the public. Can you explain this?

PStS Barthle: AfricaConnect addresses German and European medium-sized companies that want to invest in Africa in a volume between 750,000.00 Euro and 4,000,000.00 Euro. By contrast, AfricaGrow targets African small and medium-sized enterprises (SMEs) or start-ups and is nothing more than an umbrella fund. We thus try to provide venture capital to the start-ups through the fund, in order to support SMEs in Africa from our side.

PStS Barthle: There are different possibilities. On the one hand, we at BMZ have the DeveloPPP program for public-private partnerships. In addition, there are other opportunities pursued through the Ministry of Economic Affairs. However, in principle the situation is such that, with smaller investments, the accompanying costs are so high that they no longer pay off for German SMEs. For example, if you invest in Africa as a medium-sized company, you need a local contact person so that the business starts off well and pays for itself. That is why we first added 750,000 Euro as a threshold for AfricaConnect, as we realized that an investment below five million Euro would not be rewarding for example for banks. We are therefore trying to close this gap of less than five million Euro. However, I do not want to exclude that if the program starts well and is accepted, this threshold, if you want to call it like that, can be adjusted downwards again. However, there is a natural lower limit, where there must be adequate infrastructure and staff to make an investment worthwhile. For this reason, we introduced this threshold to AfricaConnect for the first three years. 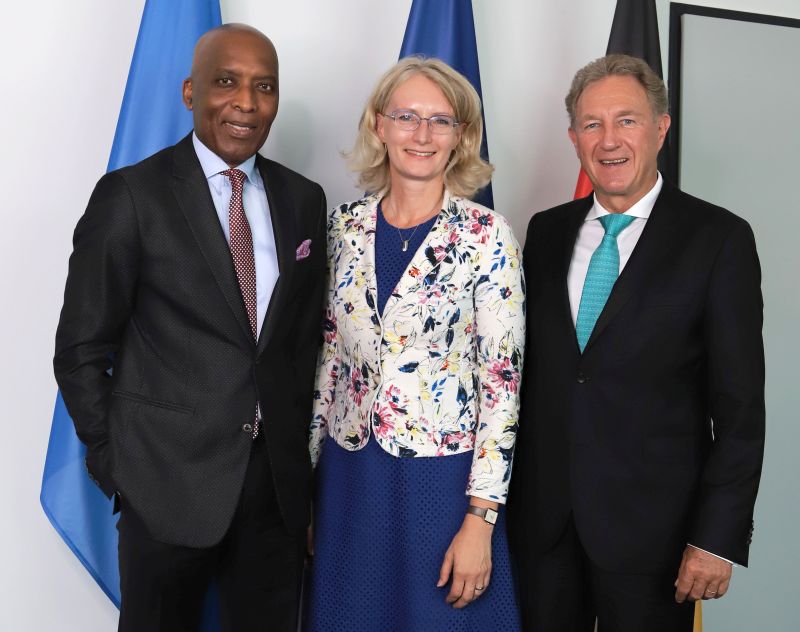 Notre How can we avoid the complete exclusion of German SMEs, which produce products such as Ziegra's ice cream machines, which are better suited for Africa than Germany?

PStS Barthle: Our experience is that when we talk to medium-sized companies, we always hear the following: "The move to Africa, in order to build business relationships, is relatively difficult." They do not know the country. Every single country is different. They cannot judge the conditions on the African market and, if at all, they can only do so with difficulty. Starting business relationships is therefore progressing only in small steps and these first steps are the ones we want to support. For this, the medium-sized company needs previous experience. That is why we developed our AfricaConnect program.

What role can African engineers play in development cooperation?

When it comes to establishing business relations with Africa, the 6,000 African engineers working in Germany can make their contribution. Why were these not included in the design of AfricaConnect? Our engineers do not need an interpreter and do not receive any expatriation allowance when they are deployed in Africa. These are incredible sums of money that could be saved.

PStS Barthle: (Laughter) Surely you have a huge advantage, not only in terms of languages, but also in terms of the markets and the country. But maybe we can do something through AfricaGrow. If you want to start a business in Africa, we at AfricaGrow do not have these investment limits. And this is exactly where starting and venture capital is concerned.

I heard about AfricaGrow for the first time during your speech on the occasion of the 6th event "Business Meets Africa" at the IHK Chemnitz on 19 June 2019. What kind of experience has the BMZ got with AfricaGrow?

PStS Barthle: It is not that easy to found such a fund. We initially had to endure many fights, as far as the location is concerned. That will probably be Mauritius. And that was not easy, because the German Finance Minister would have liked to see Germany as location. However, Germany is not the birthplace of venture capital funds, whereas Mauritius is already a location for some African funds. We can dock on that. We expect to launch AfricaGrow by November 2019.

How big is the fund?

Faced with the fact that our African engineers are active in Germany, AfricaGrow unfortunately does not help us. But we are sure that a fund for investment projects in the framework of about 250,000 Euro to 500,000 Euro could achieve more than AfricaConnect. Our project is PPC Partnership (Public Private Civil Society Partnership); meaning a program designed to generate collaboration between the public sector, the private industry and diaspora organizations of engineers, economists, doctors, etc.

PStS Barthle: I do not rule out that we will change the limit again. We have discussed it a lot and DEG is more concerned about whether its available 400 million Euro budget then also addresses enough SMEs who have investment needs in the range between 750,000 Euro to 4,000,000 Euro. The 80 notifications we have received so far are far from sufficient to absorb the fund.

What happens if the fund is not absorbed? Will you then pay the remainder back to the Ministry of Finance?

PStS Barthle: Probably yes! The Minister of Finance will be pleased.

Luxembourg is bigger than sub-Saharan Africa!

Let us now talk about the sales figures of German exports to sub-Saharan Africa. Mr. Martin Kahlhöfer, divisional Head of Africa / Middle East at the GTAI (German Trade & Invest), a branch of your Ministry, presented the following figures at the 5th event "Business Meets Africa" at the IHK Chemnitz on 20 June 2018: 4.9 billion Dollar German exports in 2016 to sub-Saharan Africa without South Africa. That is less export volume than from Germany to Luxembourg. However, 54.5 billion Dollars from China to the same region. This is the reason why we offer our contribution with PPC Partnership, in order to boost German-African economic relations.

PStS Barthle: First of all, I am glad that the German Chancellor has launched this chunk of a billion Euro. That was a brave promise, because the funding was not fixed at all. Thus, we have managed to start this development investment fund. This is, I believe, an important step towards making private investment in Africa more attractive. In general, we are working hard to increase the transparency of development cooperation around the world, in particular to increase our commitment to private investment at the multilateral level.

Which countries do you mean when you mention a multilateral level?

PStS Barthle: For example, I attended the World Bank Spring Conference in Washington in 2018. In those days we, together with the British, the Dutch and two or three other countries, were the only ones who spoke about and advocated private investment and more involvement of private capital in development cooperation. Unfortunately, we were rather faced with scepticism among the other partner countries. At this year's Spring Conference in April, however, the tenor was a completely different one. The prevailing unanimous opinion was indeed: "We need more private investments in developing and emerging countries, so as to master the challenges at all". Most countries now understand that the public funds we have available will not be enough to meet the challenges. So you inevitably need more private capital. We have done a lot of persuading and achieved that this thinking now prevails at the multilateral level. Every privately invested Euro or Dollar creates a lever, and only through this leverage can we create the jobs we absolutely need.

German Chancellor Merkel travelled to many African countries in the past two years. This also applies to Development Minister Dr. Müller. Did you carry this message to Africa?

PStS Barthle: Personally, I do this everywhere I go. In every country I visit, I always tell people, "You need more private capital and more private investment!" Only then will you get the necessary number of jobs. This is a difficult exercise, because in the so-called Development Cooperation (DC) community and even in our own parliamentary committee, there are some colleagues who are very cautious here and still falsely fear that privately-used capital will only serve to exploit land. This is not the case!

I have seen that in your constituency, Schwäbisch Gmünd, so-called jewellery days ("Schmucktage") are held.

The Senegalese are world champions in gold and silver processing. And that is at least one area where we can provide development aid. I would like to see a Senegalese booth at the next "Jewellery Days". Since Germany could learn from this activity.

PStS Barthle: We can organize that. In Germany, there are two large jewellery centres: Pforzheim and Schwäbisch Gmünd. We are smaller than Pforzheim, but traditionally a gold and silver city. We still have many goldsmiths and silversmiths domiciled here, and above all training facilities for goldsmiths and silversmiths. We are in a strong position there. In that sense, it would really be an ideal exchange. It would be even better, if we could include Pforzheim.

Similarly, a delegation from Schwäbisch Gmünd or Pforzheim could visit Senegal.

PStS Barthle: I can assure you, as soon as I convey that idea to my Lord Mayor Richard Arnold, who is a very cosmopolitan person, and I tell him that Senegal would be interested in initiating an exchange with us in the area of gold and silver processing, I will certainly only find open doors.

As a last point, we would like to invite you to the 4th German-Senegalese Economic Summit on 15 November 2019 in Frankfurt am Main, and hope that you will have time for a keynote speech.

Thank you so much for the interview. 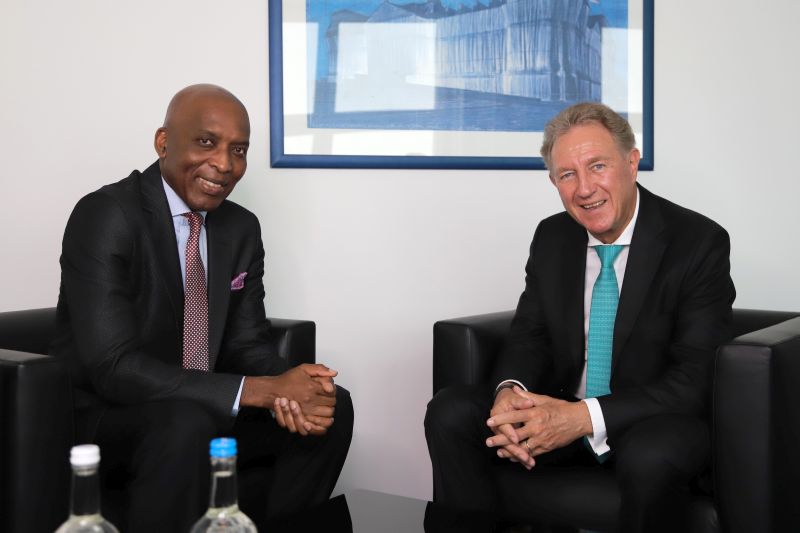