The Baraka Refugee Project in Dakar: unique in the world! 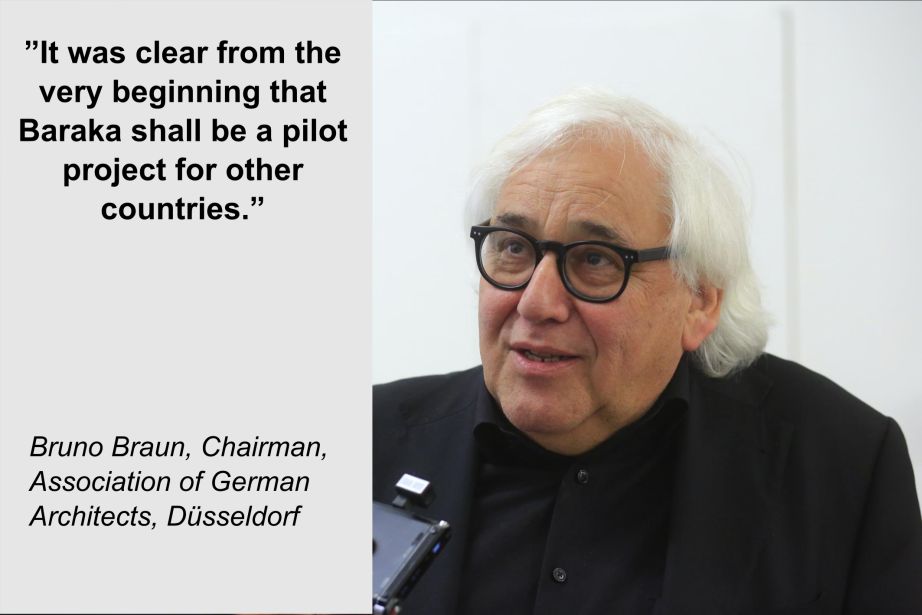 Refugees from the neighbouring countries of Senegal live in the city of Dakar in a slum area called Baraka. Now, a new urban district shall emerge from this slum. Bruno Braun, Chairman of BDA, the Association of German Architects in Düsseldorf, is involved in this project. On the occasion of the award ceremony and the exhibition of this project, we conducted an interview with him.

SenGermany: Mr. Braun, I am very pleased that such an exhibition takes place in Düsseldorf. In Senegal, however, people do not read the Rheinische Post and this is the reason why we want to report on the Baraka project and this exhibition for the readers in Senegal. How did you, from the architect's point of view, invite by a call for submissions to the competition on the Baraka project at the University of Applied Sciences in Düsseldorf?

Bruno Braun: There is a past history to this project. The Association of German Architects in Düsseldorf dealt with the subject "Architecture for Refugees" around two years ago. We held the view that we must not only position containers, but that the architecture also needs a culture. We initially approached the subject in Germany. We organised a symposium. We invited several architects to participate, so as to foster the subject "refugee living" here on site. And currently we have a project which we implement in Düsseldorf: building a house for refugees and with refugees.

SenGermany: And what have such a project and Bakara in Dakar in common?

Bruno Braun: The idea to get involved in Senegal came through an enquiry of Mrs. Ute-Henriette Ohoven, Consul General of the Republic of Senegal. She mentioned this project and said: "I need help. Are there any architects in Germany, who can help me?" Thereupon we, at BDA Düsseldorf, immediately said "yes, there are". It is an exciting venture. It is indeed highly interesting to do something locally, in fact not only when refugees arrive here in Germany, but in the place where they currently live. We felt motivated from the very first moment. Then we came up with the idea to get the students and our young colleagues on board, to enable them to deal with this subject during one semester with our support and with the assistance rendered by professors. This is how the idea emerged. 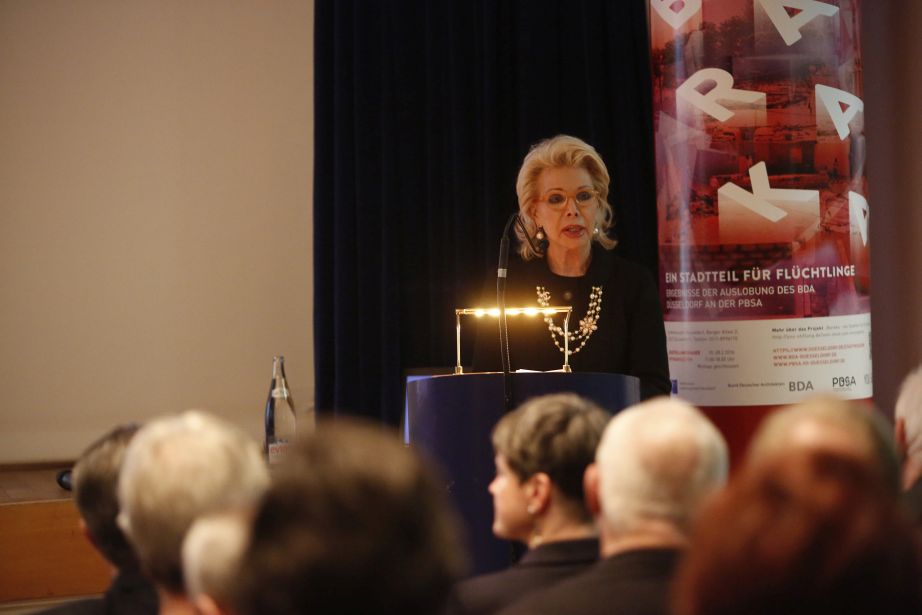 SenGermany: Well. I assume, you do not know so much about Senegal as Mrs. Ohoven. What is it that motivated you to start this project for a foreign country, which is not well-known in Germany and in Düsseldorf?

Bruno Braun: Yet, I had a good deal of knowledge about Senegal, and I have kept myself informed of this country. What truly excited me is that Mrs. Ohoven always came back from Senegal with good news, and found support in Senegal for her idea to develop Baraka into a new urban district. I found it an excellent idea. This preparatory work performed in the country itself, encouraged me to help out.

SenGermany: How long did it take till you prepared the competition?

Bruno Braun: We appealed to the students via the professors: "Who joins in? Who could imagine writing this kind of semester thesis?" As part of the student research project, a specific paper is to be delivered in each semester. We spontaneously found more than 100 students, who wanted to participate.

Bruno Braun: Initially only in Düsseldorf. But when Cologne and Aachen learned about this kind of competition taking place in Düsseldorf, they all wanted to participate, since young people got excited about this kind of project and competition. It wasn’t merely a matter of winning a prize, but it was also an opportunity to explore and develop a better understanding of new tasks and cultures, and to shape architecture accordingly. Those young people were fascinated by this project to such an extent that we had to decide whether we should call for submissions everywhere. But due to the limited space in the city museum, we had to restrict the work to the University of Applied Sciences in Düsseldorf.

Bruno Braun: We set targets, which we established jointly with Mrs. Ohoven and her team. The relevant questions were answered in Senegal, whereupon a summary was made available to the students as wording of the call for submissions. Parameters were set, like for instance for the size of a housing. Then we financed the trip of two students, who travelled by air to Baraka in Senegal.

SenGermany: When did this trip take place?

Bruno Braun: That was in early September 2015. The two students were intended to stay for two days, but only returned after ten days, since they were given such a friendly welcome in Baraka. They were very thrilled, did extensive target research which was important for their work, carried out field surveys by themselves, levelled existing buildings, checked the location of trees, explored the surroundings and produced a great film. After their return we once again organised an information event with the collected data. In the meantime Mrs. Ohoven had also furnished new information. We provided the students with all this material for their work.
SenGermany: If you had more than 100 competitors already, how did you select those two students who travelled to Senegal for making the film?
Bruno Braun: As a first prerequisite, the students had to be fluent in French and be ready for departure within a few days, because they had only one week to prepare themselves for the trip. Then, the professors made their decision in favour of two highly dedicated students.

SenGermany: Who financed the trip?

Bruno Braun: The trip was financed by BDA Düsseldorf. The members pay their monthly contributions into the fund. The entire competition was financed out of this fund.

SenGermany: Let us now talk about the scalability of the project. Professor Frederico Mayor, former Secretary General of UNESCO, who was a jury member, wished to have the Baraka project transferred to other countries as well, since refugees can not only be found in Senegal. Is this a new challenge for you?

Bruno Braun: This is basically a challenge, as we always believe that architecture and urban construction must of course be adjusted to the respective countries and environments. We cannot simply use a nice cover, but we must rather design and newly plan something emerging from the structure. A few parameters can, however, be repeated. It was clear from the very beginning that Baraka shall be a pilot project for other countries. Also in the light of the initiative taken by the Senegalese government by saying: "No, refugees shall not be pushed to the outskirts of the city, but a new urban district shall be built at the place where they live now already." This is a globally applicable example, which strikes me as excellent. 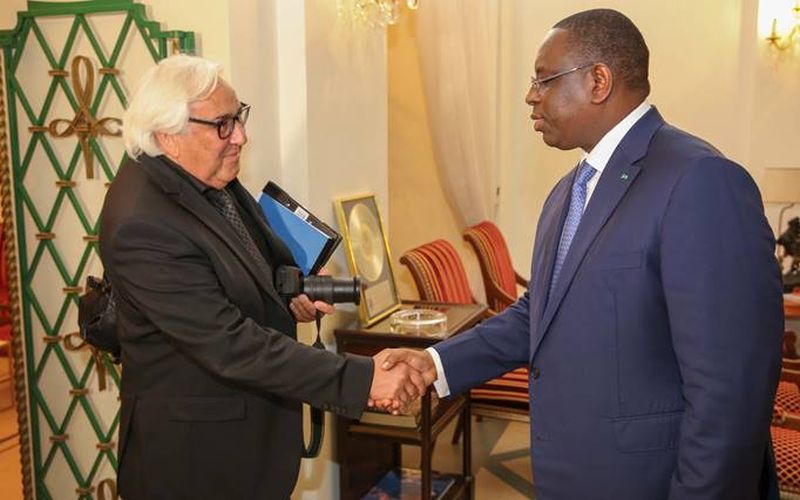 SenGermany: People shall also be able to work in Baraka, and the plans provide for shops. Moreover the people shall be trained. Was this intended for the project from the very beginning?

Bruno Braun: The initial idea was to set an example for the entire world. Secondly the inhabitants should be mobilised to participate in the project. In parallel they shall be trained in occupations which can be practised in such a district. This was our idea in the first place. This is also what was communicated to the students in the competition, and I personally felt great enthusiasm. What fascinated me about this project was that not only urban construction and architecture are concerned, but that the key issue is the integration of refugees who partially live in Senegal in the third generation.

SenGermany: The refugees are now intended to work on the project. You certainly have enough men among the 1800 inhabitants of Baraka, who will tackle this work?

Bruno Braun: My vision is that we will indeed not only come into contact with the inhabitants when there is work to do, but previously already. I would really like to discuss with the inhabitants on how their future urban district and every single housing shall look like. On what we have done properly or not. This is what I regard as first collaboration. When it comes to construction work, we will of course have to pick and choose specific crafting skills. For this purpose we also need the support of the population. People must volunteer. They must register and thereafter men and women shall be trained in the enterprises doing the construction work, so as to be able to continue practising this occupation later on.

SenGermany: It is therefore a concept of integration of refugees from West Africa into the Senegalese society, and of their occupational training; which means that the refugees will have a new home in Baraka.

Bruno Braun: I believe that, now already, there is no longer a return for many refugees living in Baraka to their homeland. It is therefore important that they find a new home, and home does not only mean the place of living or cities of culture, but also occupational work.

SenGermany: Where is the next station of the exhibition planned to take place?

Bruno Braun: We are hoping for a museum in Dakar. We seek to achieve a collaboration between the city museum Düsseldorf and a museum in Dakar.
Mr. Braun, thank you so much for this interview.
Interview conducted by Ibrahim Guèye 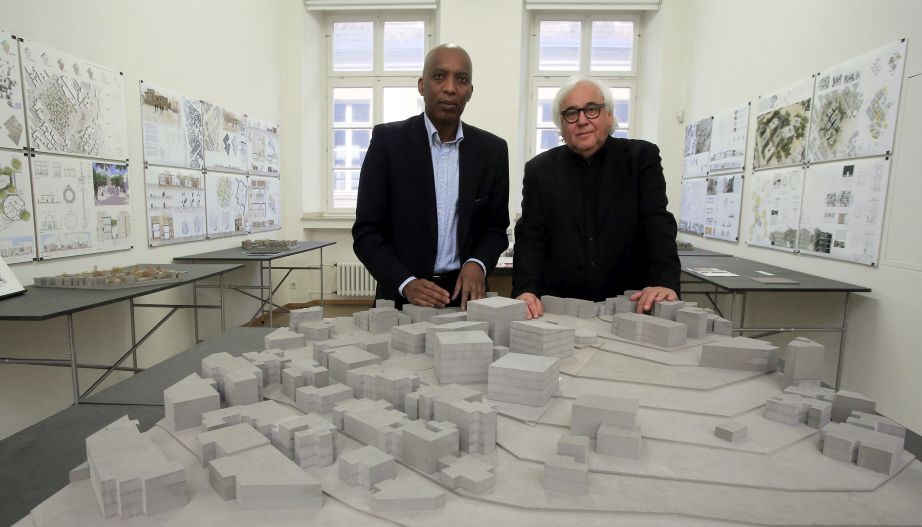 Exhibit of the winner’s modelmaking

The Baraka Project in Figures

Baraka covers a surface area of around 9000 sq m in the middle of the city Dakar, which is surrounded by a residential area. Around 1800 refugees from several West African countries are living there. 220 housings will be constructed for the slum inhabitants. The construction work shall start in late 2016 / early 2017 and extend over approximately two and a half years. Shops are also planned in addition to the housings, so as to enable the inhabitants to offer local products and works of art to their direct neighbours and tourists. The project also includes premises for training young inhabitants in several handicraft trades and in the IT area. Three young bloggers have already been locally trained for advertising the project, who report on a daily basis on life in Baraka and on the project development: https://barakadakar.wordpress.com .